When we talk about septum deviation, nasal obstruction (adenoid) is the very first matter. Though in septum deviation, adenoid is the most crucial issue. Keep in mind that the septum’s deviation may cause other issues such as headaches and sinus infections. On the other hand, you may encounter someone with a septum deviation who doesn’t have any considerable problems! Although Septum deviation is seen in most people, all of these cases are not clinically important cases, and there’s no need for any special treatment in most cases.

This blog post helps you in this matter if you want to learn more about septum’s function and septum deviation. 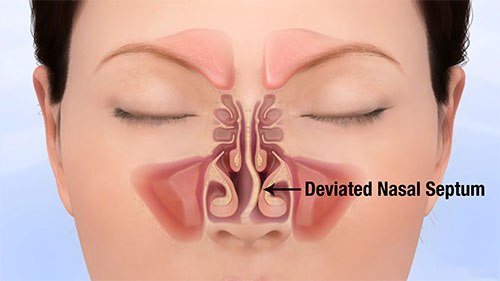 What is the nasal septum structure?

To get more familiar with this disorder, we get to know the structure of the septum. The nasal septum is a very narrow blade that separates two nostrils and has 1 to 2mm thickness in different parts. It should typically be in the middle of the nose, but its slight deviation to the sides will not necessarily be associated with any particular problem.

Septum structurally has two parts, the front part with a cartilaginous structure and the back and top part with a bony structure. Cartilage is a semi-rigid tissue with consistency and stability having a static state, but it’s much softer and more flexible than bone and can be easily cut.

One of the most important reasons that the front and lower part of the nose is made up of cartilage is to enable the nose to move to the sides, be flexible, not just a wholly fixed organ.

To prevent the nose from breaking during strokes, the low part of this organ, which is subjected to impacts more, has a cartilaginous form to be more flexible and less vulnerable against strokes.

There is a thin mucosal covering these two parts of the septum, vital to both blood-supply and temperature regulation and odor and respiratory quality.

What is the nasal septum function?

Functionally, septum separates the nostrils. One of these separation benefits is to prevent germs transmission from one side to the other. Another merit is preventing air circulation due to a large space in the nose while it enters the nose, making some breathing trouble. The narrower the air entrance space is, the less possibility of air vortex will be! In summary, the septum function is to regulate the entry of the air to the nose.

Preserving nose form is another function of the septum. In people with nose-breaking, we can easily observe nose deformation due to septum injury, called nose contusion.

There are other areas in the septum, including areas that can cause severe headaches when stimulated, sometimes the main cause of migraines!

There are three main reasons for septum deviation:

Traumatic deviations have sharp, irregular angles that affect all areas of the septum equally. Injury-related deviations may also include displacement or fracture of cartilage.

Septum deviation can be expected when the fetus is still in the womb or during childbirth. A study in 2012 in India showed that neonatal nasal deviation affected 20% of infants. These cases were related to childbirth and often occurred in infants with high weight and hard childbirth. Septum deviation usually gives noses a C or S shape. This type of deviation is often slight and occurs in front parts of the nose, which will get more deviated by ageing!

Difficulty with breathing and consistent sinusitis, infection or inflammation of nasal mucosal are the main symptoms often confused with the symptoms of a respiratory infection, the common cold, or an allergy.

People with mild septum deviation may only notice these symptoms in these conditions:

Cases with considerable deformation are more common in infants due to smaller respiratory channels and nasal breathing. In severe cases, side-effects can be even fatal! In case of hard breathing or having vertigo and dizziness, the patient should be taken under medical care. 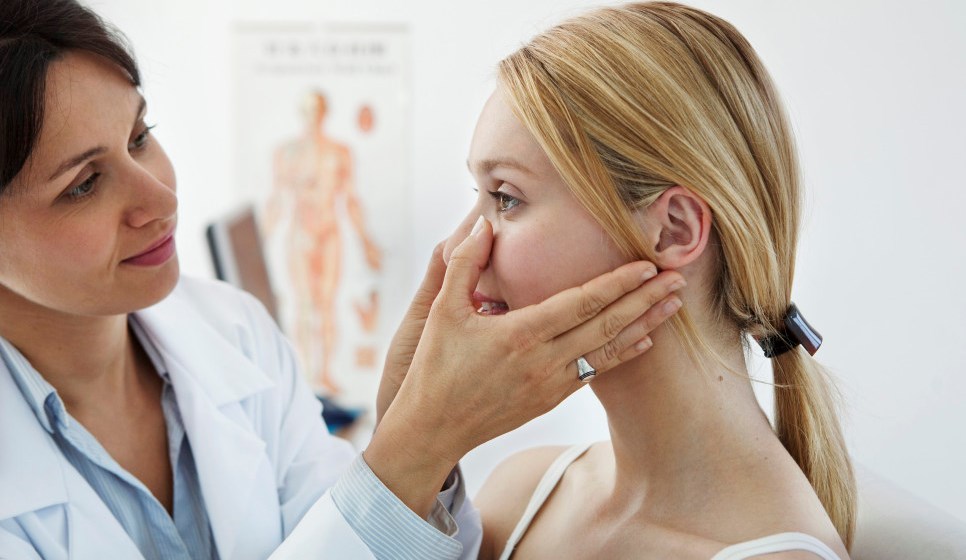 What is sleep apnea?

Sleep apnea is a disorder in which breathing stops for short periods during sleep. These periods are called apnea. Apneas usually last for 10 to 30 seconds and can repeat hundreds of times in acute cases. The person usually is unaware of apnea, awakening repeatedly with suffocation feeling. Each apnea period can even last up to 2

Apneas can result in sleep disorder, causing a lack of alert state during the day, leading to irreversible incidents! It is unbelievable to know that untreated people with apnea disorder are up to seven times more likely to be involved in motor vehicle crashes than ordinary people.

Sleep apnea is divided into three types: it can be obstructive, i.e., an obstruction in the upper air paths. It can be central, i.e., brain disorders, and it can also be a mixture of both central and obstructive apneas.

Your doctor will ask you about your precedent for fractures, nasal injuries, or nose surgeries after checking the symptoms. Then they look at your septum position using a lamp and a nasal speculum (a tool that gently opens your nostrils) to examine the inside surface of your nostrils. The nose’s inner lining tissues may be temporarily contracted using a nasal spray called Afrin or Neo-Synephrine to make the septum more obvious.

Sometimes, a fiber-optic scope will be inserted into your nose to examine the nose’s posterior septum directly. In most cases, you won’t need any particular examination.

Your doctor will refer you to an ENT (Ear, Nose, Throat) specialist or a plastic surgeon if your septum’s deviation leads to severe nose hemorrhage, frequent sinus infections, or other noticeable problems additional treatments.

Septoplasty is a corrective surgical procedure done to straighten a deviated nasal septum. In the case of the following symptoms, the patient can use septoplasty:

The most typical reason for septoplasty is when the patient cannot breathe comfortably on one or both sides of the nose. Correcting this abnormality can improve airflow and breathing when there is a significant deviation.

If rhinoplasty is needed, it can be combined with septoplasty, called Septorhinoplasty.

In septoplasty, a large part of the septum is not removed, and the doctor tries to turn it back to its previous site in the middle part after softening the septum. Sometimes the septum returns to its place, using splints inserted into the nostrils after surgery.

Sometimes the patients are prescribed to prevent hitting impacts for one or two weeks to let the septum site improve thoroughly.

Turbinoplasty may be Essential in cases that medication has no significant effects on improving respiratory.

Concha size reduces by moving the sizeable lateral bone and shrinkage of the mucosa. Breathing usually improves by one week after surgery, lasting for one year or more. Turbinoplasty and septoplasty be combined with sinus surgery and also cosmetic rhinoplasty.

This surgery is usually done under general anesthesia, including nasal cover removal from the septum and removing bone from the deviated area. Then the covering is put back to its place. The nose is gently bandaged for 24 hours to maintain its proper position, and the patient is usually allowed to return home after a day or two. 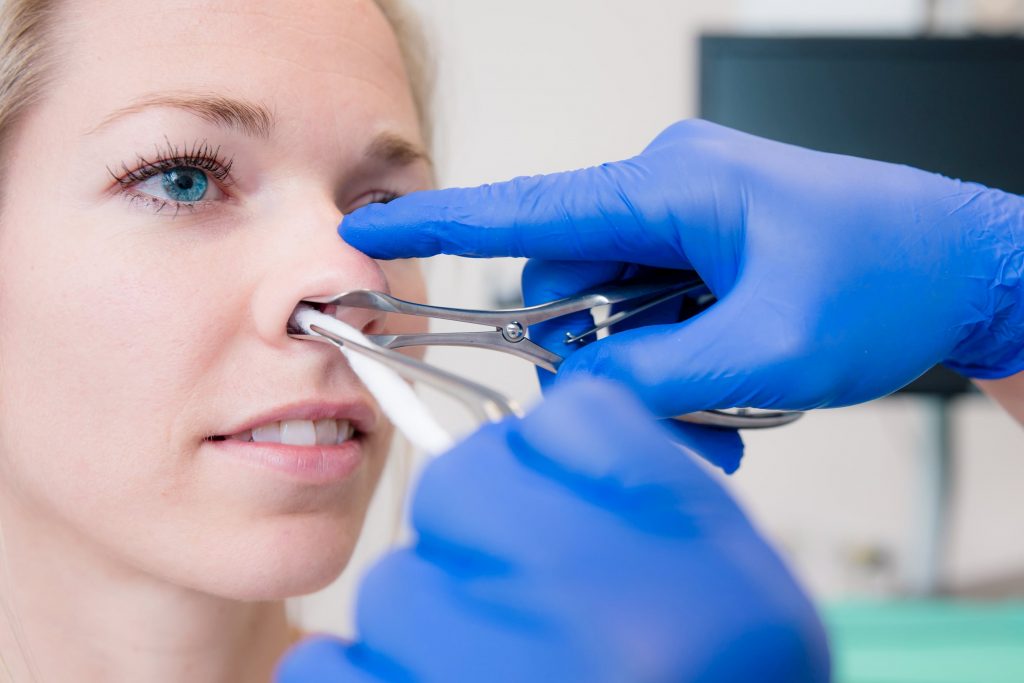 A person with a mild deviation of the septum may experience symptoms only during an upper respiratory system infection. A person with severe deviation may suffer from chronic sinusitis or frequent nosebleed that will continue until complete recovery.

If your child is diagnosed with septum deviation, the doctor may postpone the surgery until their nose’s full growth. In most cases, this growth occurs by the age of 15 or 16. Boys usually have to wait a bit more than girls because their growth process ends one-two years later.

How to prevent nasal septum deviation?

Do not hurt your nose in order not to have a deviated septum! For this purpose, wear your seat belt and shoulder shield while driving, and wear a suitable helmet or face shield during contact sports such as soccer or karate.

Does septoplasty have side effects?

There may be some side effects after a septoplasty; we have listed some possible side-effects here: 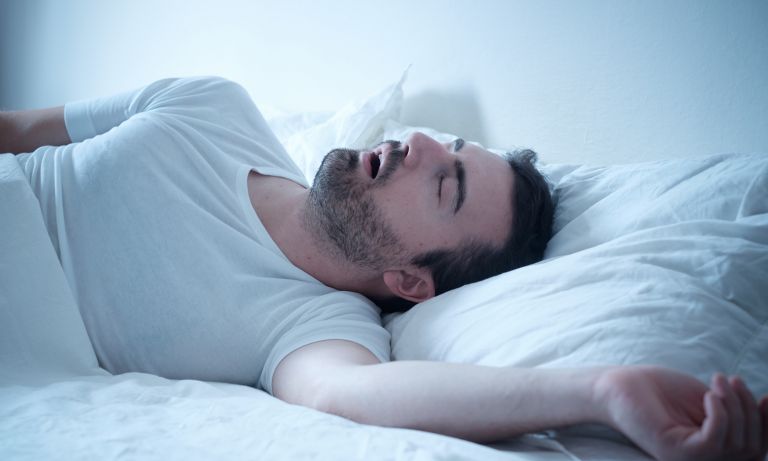 Septoplasty Post-Operative: what to do after a septoplasty?

After septoplasty surgery, your surgeon will prescribe medication to reduce infection probability. Follow these tips to accelerate your recovery:

Obstruction of one or both nostrils is the most common side effect of septum deviation. This may cause these issues:

Another critical issue about septum deviation surgery is the age of the patients who want to have the operation. If the patient’s problem is not that acute and has just a so-called partial obstruction, it’s better to wait until their full growth age. But in case of severe congestion, it would be better to accelerate the operation because if the congestion is acute, it can lead to an inappropriate appearance for the child. Furthermore, the patient may develop lung disorders.